The Pennsylvania Regional Entrepreneurship Assistance Program (PA REAP) is funded by a grant from the U.S. Economic Development Administration to make the resources of PennTAP and Penn State available for statewide economic development. These resources include specialized research, outreach, technology transfer, and commercialization capabilities, as well as faculty expertise and the use of sophisticated laboratories. Some of the programs that make use of PA REAP funding include the Inc.U Competition, Community Innovation Hubs (CIH), and Learning Factory Engineering Assistance. 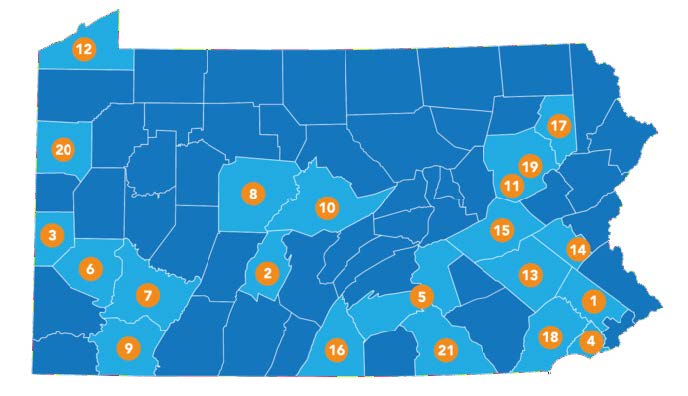 At the Penn State New Kensington campus, the Corner LaunchBox program and co-working space concepts were made possible in part by a seed grant of $150,000 from Invent Penn State, a Commonwealth-wide initiative to spur economic development, job creation, and student career success. Penn State New Kensington used the grant to create a unique model that melds entrepreneurship, co-working space, and community-driven economic development to revitalize the city. The result is the first center of its kind in Westmoreland County with the goal of being a hub of collaboration, creation, and innovation in New Kensington.

The goal of the Corridor of Innovation is to foster a positive environment that will attract new investors, businesses, and customers to the City of New Kensington while also serving as a model for revitalization and economic development efforts in “rust belt” areas of the region and Commonwealth.

The Inc.U Competition, open to all Penn State undergraduate students, provides an opportunity for student startups to compete for funding and eventually earn a spot on WPSU’s TV production, The Investment, where they pitch to a panel of experienced entrepreneurs. In 2017 after the top 6 student companies presented pitches, three top prizes were awarded: $15,000 to Reflexion Interactive, a concussion-testing device for school athletic programs; $7,500 to Rain Reality LLC, a producer of augmented reality content for teachers; and $7,500 to ModZero, a patented device for sighting and targeting scoping mechanisms for military and police weapons.

In 2018, the Inc.U Competition received a record 72 video submissions. Thanks to promotion and collaboration with all 21 CIH’s, four of the six finalist teams were from campuses outside of Penn State University Park. PennTAP provided finalists with coaching and mentoring for the two months leading up to the production. Ultimately, one top prize was awarded: $30,000 for Moichor to advance their smartphone application that works with microfluidic test strips to provide a complete blood count to users in 30 seconds or less.

In 2018, PennTAP worked with PA startups and small and medium-sized enterprises to develop and scope 56 Learning Factory Student Engineering design projects. PennTAP has participated in the successful effort to broaden Learning Factory senior design capstone projects to other campuses, starting with Penn State Lehigh Valley. For example, a bus tour arranged by the Lehigh Valley CIH to host company representatives at the University Park campus recently resulted in the completion of a biomedical engineering project in the Bethlehem area.

Get the latest PennTAP events, webinars, and news delivered to your inbox.